The opus of Stevan Stojanović Mokranjac encompasses several areas of music. In the domain of vocal music Mokranjac creates works of worldly and spiritual music, scene music for theatre purposes, children’s songs, solo songs to the verses of well-known Serbian poets and some Serbian custom folk chants. As far as instrumental music goes, there is the 5th fugue as the obligatory piece in the studies in which Mokranjac shows his fine knowledge of counterpoint, as well as pieces for the string quartet.

Mokranjac engages in melographic work and registers folk songs from all south Slavic nations. He also writes theoretical papers on musical folklore. Mokranjac practically engaged in chamber music, being one of the members of the first Serbian string quartet.

Mokranjac’s  predecessors in Serbian music liked to combine adaptations of folk songs into medleys or, as Josif Marinković called compositions of this type, a kolo (circle dance). Yet not until Mokranjac did this genre attain maturity under the poetic name “garland”, which became a synonym for an artistically adapted, organically unified choral cycle of folk songs. Miloje Milojević saw the Garlands as “great vocal rhapsodies”, “our folk bal­lads and romances”, and Milenko Živković as ” a musical epos celebrating our people and lands, our customs and ways, the fateful attachment of our people to their birthplace…”

Fifteen Garlands composed over a quarter century (1883-1909) reflect the artist’s development, the main characteristics of his creative work. By using songs from Serbia of the period – before the Balkan Wars (indicated in the subtitle, From My Homeland: I-VI and XIII “gar­lands”), from Old Serbia (VII, XI), Kosovo (VIII, XII), Montenegro (IX), Macedonia (X, XV), Bosnia (XIV), and for Coastal melodies from the Croatian littoral, he demonstrated the breadth of his national sentiments.

The artistic qualities of the Garlands are based on several factors. First of all, Mokranjac chose essentially rhythmic, melodious songs; for the first time the mixed, non-symmetrical measures typical of southern Serbia and Macedonia are used in an art form. Seeking an adequate interpretation of the latent harmonic features of folk melodies, especially in the later Garlands, he often substituted the Europeanized major-minor concept for modal solutions, including oscillation between two equal tonal centres. Though the choral structure is basically homophonic, there is evident concern for the melody line of each individual voice; as successful contrasts there are occasionally unobtrusive canon imitations. Instead of treating all stanzas of a song in the same manner, like most of his predecessors, Mokranjac liked to vary the harmonization and choral structure, illustrating the con­tent realistically (for example, by introducing soloists or alternating the female and male chorus when interpret­ing dialogue sections in the text) and giving psychological depth. Finally, while the material for some of the earlier Garlands (I, III, V) because of the large number of songs used (up to 10) sounds quite rhapsodic, later the number was limited to four or five, and deliberate contrasts in tempo and character produce a coherent whole and awaken associations with instrumental forms (sonata or suite).

All the Garlands were directed for the first time by Mokranjac himself, and except for the First, with the Belgrade Choral Society; from the Eleventh onwards this generally took place at a traditional concert on New Year’s Eve (January 13th by the Gregorian calendar).

The coastland tunes, consisting of songs which Slavoljub Lžičar had arranged under the same title some time before, correspond fully by their form to that of that of the song-wreath. Bright, cheerful tunes in major tonalities of the Mediterranean type and a resonant choral texture are the main characteristics of this composition containing eight songs. The simple, reticent Vozila se šajka, mala barka (A small boat was floating) is fol­lowed by Zbogom, neharna dušo (Good bye, my careless sweetheart) in the rhythm of a slow barcarole and Popuhnul je tihi vjetar (A light breeze blew), with the soloists singing at the beginning of each stanza. The song Aj zelena, aj zelena (O you green, green forest) written as a dialogue be­tween female and male voices, leads to the pas­toral Oj, Jelena, vodo ti ledena (O, Jelena, you ice cold water) and the Zibala Jane (Jane was rocking her baby) which marks the first culmination of this composition with its almost orchestral structure.

The lender, lyrical song Vrbniče nad morem (O Vrbnik above the sea) is followed by the dynamic final  Majka Maru preko mora zvala (Mother was calling Mara across the sea) which, with its partly canonic arrangement, rounds up the composition in its basic tonality, the bright F sharp major.

The choral scherzo the Goatherd marks, along with the Tenth Songwreath, the highest peak of Mokranjac’s art. However, there is aconsiderable difference between these two compositions: the Song-wreaths were in fact harmonizations of ex­isting melodies on a high artistic level, whereas the Goatherd was built on melodic motives from two folk-songs (Cigančica – the little Gipsy girl -and Kraj Vardara stajaše – Standing by the Vardar) which were elaborated with great artistic freedom and, with a new text (probably written by Milovan Glišić), melted into an exceedingly suc­cessful entity thanks to the author’s originality and inventiveness. This fact, along with the clarity of the form, the melodic expressiveness, har­monic and contrapuntal qualities and the vivid, realistic description of the situation which is the subject matter of this song, has won the Goatherd a particular place not only in Mokranjac’s opus, but in the entire Serbian choral literature as well.

The introductory call “Ajde, de!” in the interval of the fourth leads to the first thematic element exposed in the manner of imitation, remindful of a double fugue.The rhythm of the second element is similar to the first, but it also presents a contrast by its ma­jor tonality. The introduction and both thematic elements are repeated and this leads us to expect the composition to develop in stanzas, but the: work develops in a different way: the little village boy, hired as goatherd, has the misfortune of seeing on of his goats slip from a high crag and die falling down. The dramatic culmination, achieved by means of a chromatic sequence sung to the words “le, le, le” (Woe to me, woe) is, of] course, not to be taken too seriously, neither are the little goatherd’s sad words “ci, ci, kozice” (tsi. tsi, my little goat), presented in the form of a canon. The whole sweet and bitter (cheerful and sad) story ends with a reminiscence of the seco thematic element, in major.

Mokranjac intended to compose a litu based on motives of all the eight modes of Serbian chant, but he wrote only the Liturgy aft the first mode; its original title was the Divine service of St. John Chrysostomos. Written after the Serbian folk chant (from the end of the 18th century), it bears witness to the author’s ability to form a fine entity by stylizing those tunes. His way of harmonizing them, with frequent use of words of secondary scale degrees, resulted in an archaic though distinctly Slavonic note, and his ruaenious use of polyphonic elements enhanced the expressiveness of the melodic line in each voice.
After the calm, homophonic opening canticle Svjati Bože (Holy God) and the simply harmonized choral responses following Alleluia, comes fee most elaborate and important part of the liturgy, the impressive Cherubic hymn (Iže heruvimi -We who mystically represent the Cherubim) which shows best the above mentioned characteristics of Mokranjac’s way of handling his material.

The brief, lapidary canticles Oca i sina (The Father and the Son), Dostojno i pravedno (It is meet and right so to worship the Father, the Son, and the Holy Ghost…) and Svjat (Holy, holy, holy Lord of Sabaoth) are similar by their thematic material and purely homophonic textures, whereas the next, Tebe pojem (We sing Thee, we bless Thee, we give thanks to Thee, o Lord), with a telling contrast achieved by juxtaposing to it the softly sounding quartet in the middle part Dostojno jest (It is very meet to bless Thee who didst bring forth God) are characterized by a broader  elaboration of the material and richer texture of be choral part. After a new series of choral responses and a brief canticle Jedin Svjat (One is holy, one, Jesus Christ…), similar to the preceding parts, the long Pričasten (Hvalite gospoda – O praise the Lord from heaven, sung during holz communion) develops and the soloist and tutti groups sing alternately in its second part.
The succinct canticles Blagosloven grjadij (Blessed be he that cometh in the name of the Lord), Vidjehom svjet (We have seen the true light) and Da ispolnjatsja (Let our mouth be filled with Thy praise, o Lord) form an entity followed by the serene, lively, moderately polyphonic can­ticle Budi imja Gospodnje (Blessed be the name of the Lord) which ends the Liturgy in bright  F major.

Mokranjac wrote his Second Requiem in F sharp minor for a mixed choir on the occasion of celebrations in memory of Vuk Karadzic. It was performed for the first time at that memorial service on September 20th 1888. Contrary to most of his other compositions of church music, based more or less on Serbian folk chant, this Requiem is an almost entirely original work. This explains a considerably greater use of harmonic and contrapuntal means, especially in comparison with works Mokranjac wrote at about the same lime (the early Song-wreaths) where the choice of means was necessarily limited by the latent harmonic characteristics of folk tunes. Elements of Serbian folk chant are to be found in the Requiem very rarely, as for instance in the opening theme of the Njest Svjat (O Lord my God, there is none holy as Thou) sung by the bass.

A very impressive gradation is achieved by the canonic imitation carried through by other voices, and the canticle finally dies out in quiet chords. The next part, So svjatimi u pokoj (With the Pričasten (Hvalite Gospoda – O praise the Lord from heaven, sung during holy communion) saints give rest) begins with a fugato but the wivds “where there is no pain, no sorrow, no sighing” bring chromaticism, and enharmonic changes, unusual in Mokranjac’s works. When the words “žizn beskonečnaja” (eternal life) are sung, the initial fiigato theme appears. 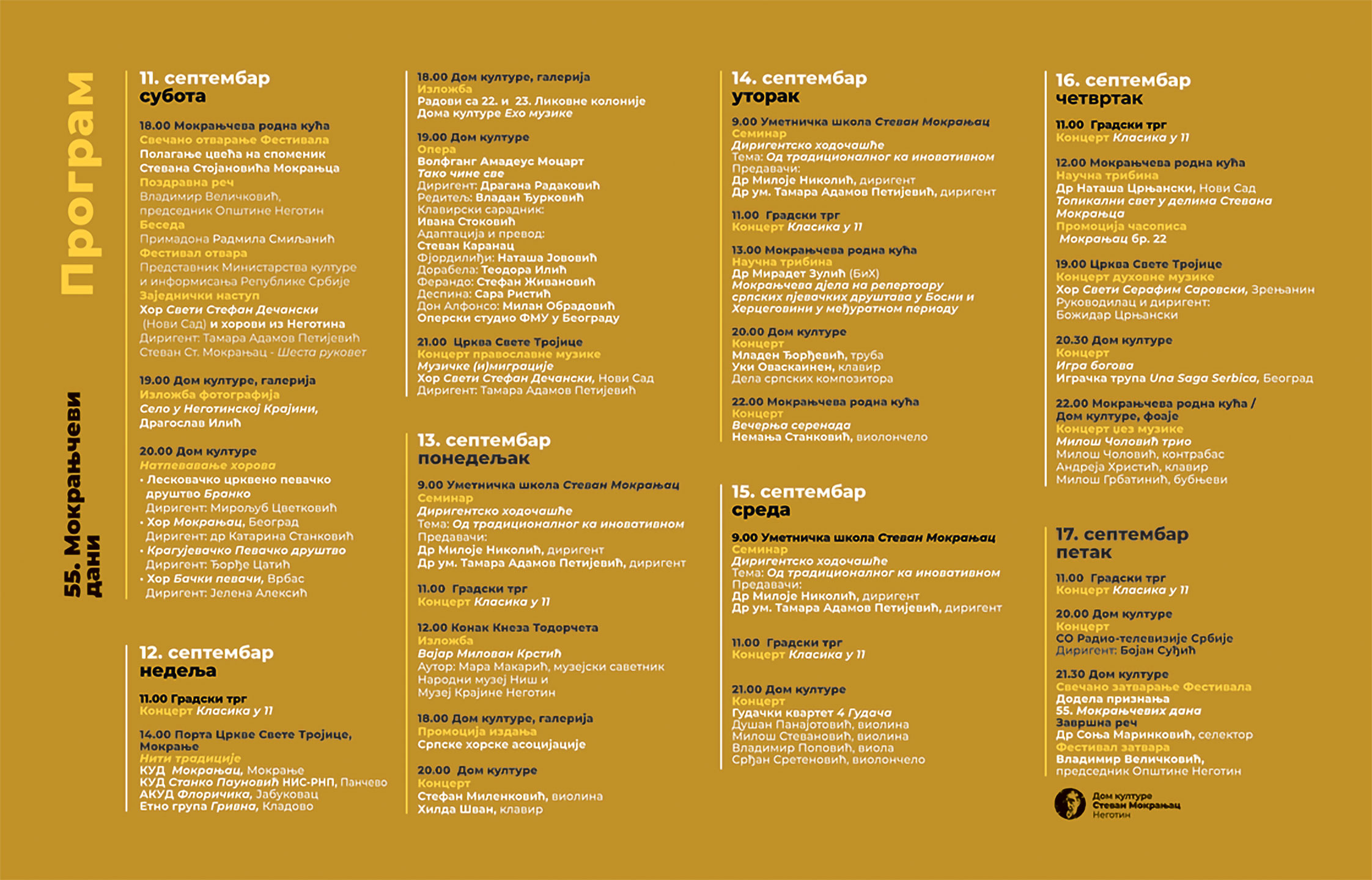